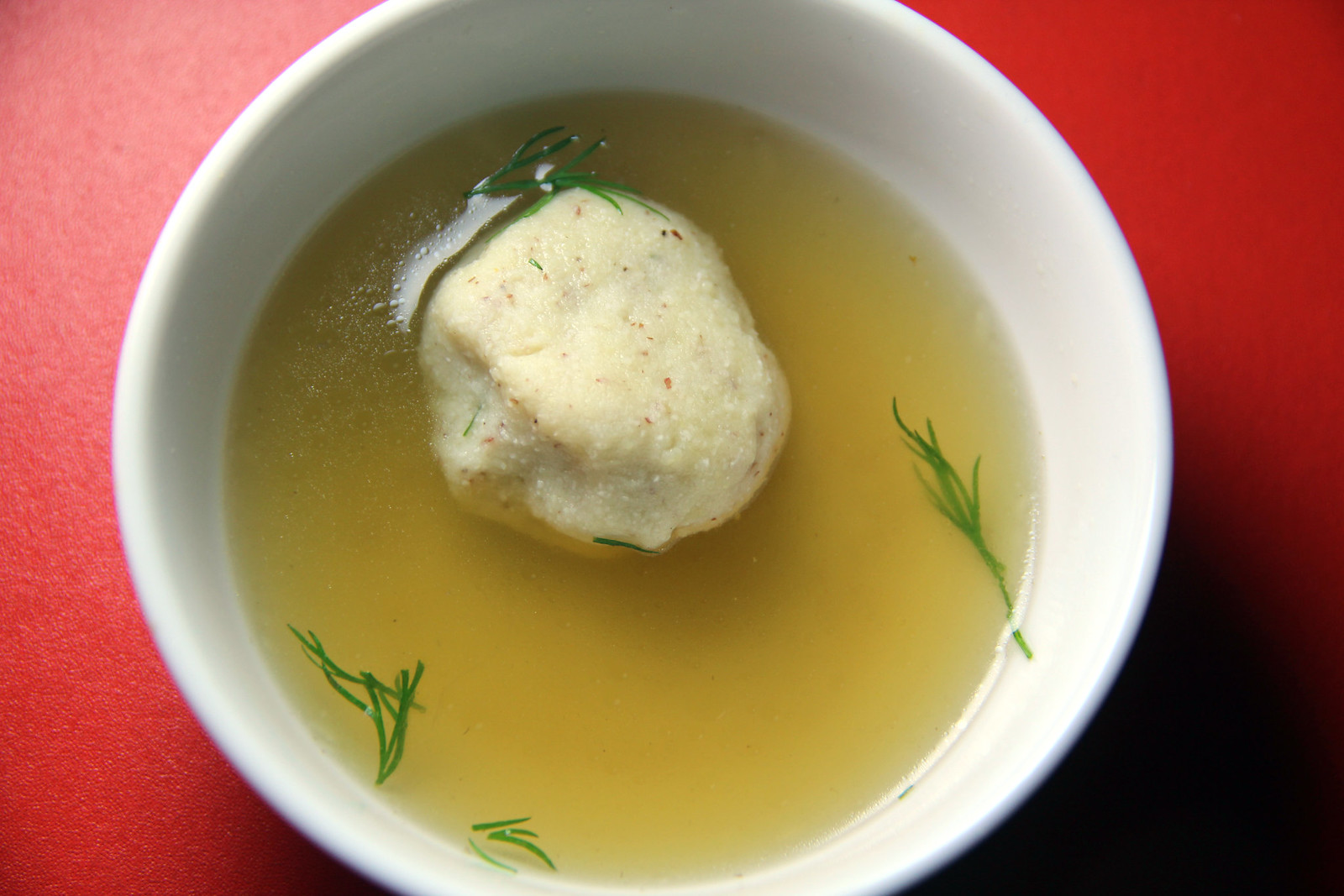 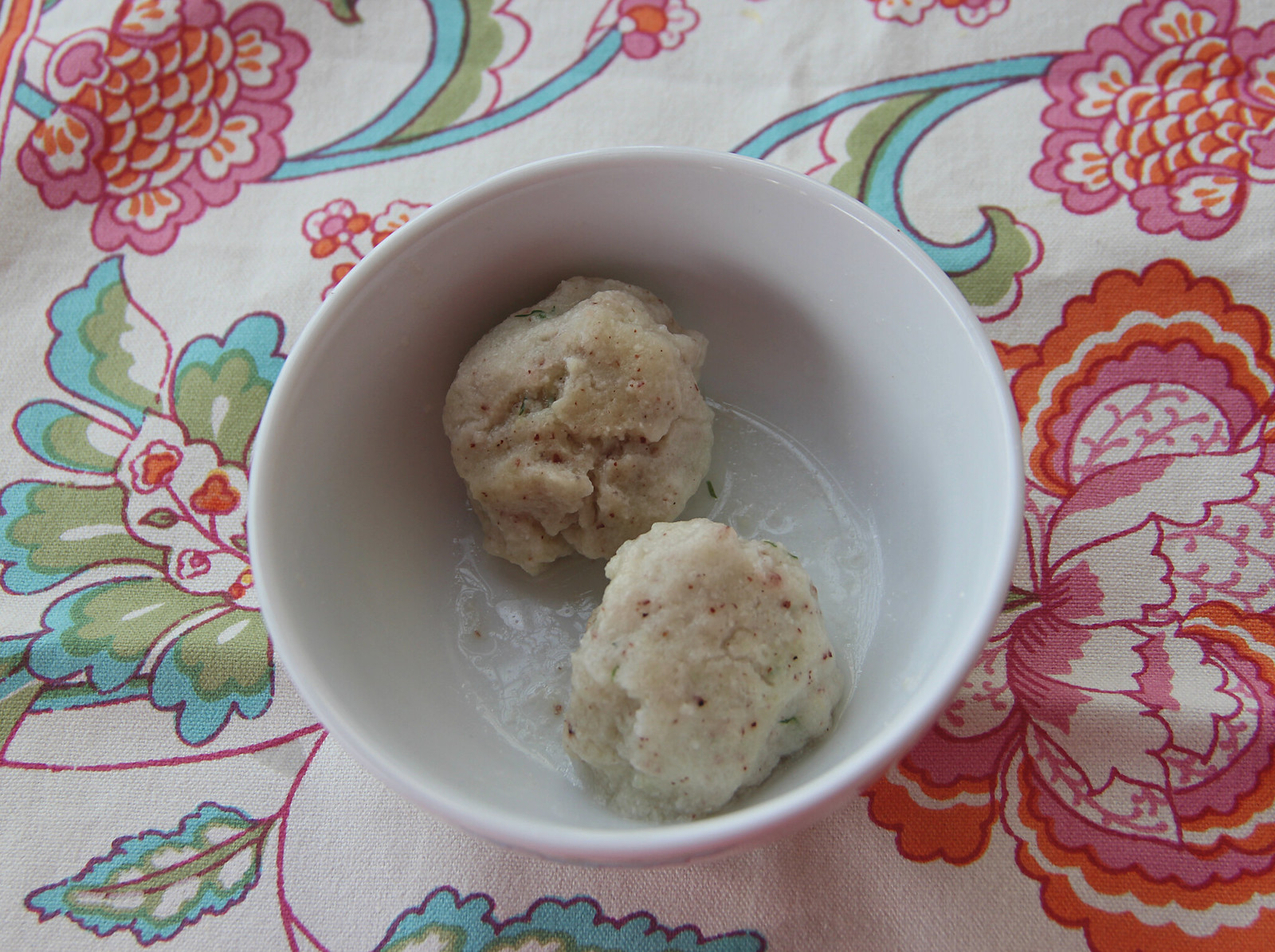 Matzo balls are a favorite at Passover and any time of the year. But what to do if you are gluten-free and can’t have regular matzo or matzo meal, let alone matzo balls? While some gluten-free matzo ball mixes are available for Passover (my favorite is Lieber’s knaidel mix), they can be hard to find.

Inspired by German potato dumplings, this recipe uses potatoes, potato starch and almond meal to make fluffy matzo balls — without the matzo. The result is gluten-free, non-gebrokts knaidlach that are fluffy on the outside, while slightly dense on the inside.

Make sure to plan out this recipe in advance, as you’ll need to refrigerate the boiled potatoes ahead of time. A potato ricer works well here to finely shred the cooked potatoes, but you can mash them well by hand instead. When boiling the matzo balls, do so at a light boil, so vigorous bubbling won’t break up the delicate matzo balls. While you can make the batter ahead of time and keep it in the refrigerator, the matzo balls are best cooked close to serving time.

This gluten-free matzo ball recipe is also featured on Joy of Kosher, a great resource for kosher recipes.

Because wheat, rye, barley, spelt and oats aren’t allowed on Passover (unless they’re in matzo or matzo meal), Passover can be a great gluten-free holiday. You can find gluten-free versions of foods that you can’t find the rest of the year, like gluten-free matzo ball mix, blintzes, cookies and cakes. But be careful to avoid my eternal mistake (when will I ever learn?), and don’t overbuy Passover products. Passover foods are almost always expensive, but they don’t always taste great.

— Don’t let the “breaded” fool you, Spring Valley Breaded Chicken Pattie Nuggets (sorry, I can’t find an online link) are coated with potato starch – a great find, since it’s hard to find gluten-free kosher chicken nuggets. Make sure the bag is labeled kosher for Passover and non-gebrokts. I also bought Spring Valley Frozen Stuffed Chicken Rolls — a good gluten-free kosher quick lunch. Also, it’s hard to find gluten-free blintzes during the year, so I stock up on gluten-free Spring Valley Blintzes, which come in cheese, apple and blueberry flavors. Make sure the box is labeled kosher for Passover and non-gebrokts, as only the Passover blintzes are gluten-free, not the ones they produce the rest of the year.

— Gefilte fish often is part of Passover meals, but most gefilte fish contains matzo meal. For the past few years, I’ve bought Kedem Gourmet Gefilte Fish, which is made without matzo meal, is gluten-free and does not contain MSG. This year, I also spotted Rokeach “Gourmet Sweet” and Rokeach “Heimeshe Sweet” gluten-free gefilte fish. Also, some of the frozen gefilte fish loaves are gluten-free.

— Most macaroons are gluten-free, including Manischewitz and Streit’s macaroons, which also use sulfite-free coconut. This year, Manischewitz introduced a frozen gluten-free macaroon dough.

— There has been a debate the past few years about whether quinoa is kosher for Passover. Quinoa is not a grain, but some want to count it as kitniyot and not permit it. Other rabbis say it’s fine for Passover. For a discussion of quinoa, see this article, “Quinoa, ‘mother of all grains,’ may (or may not) be kosher for Passover” published by the JTA news service, which has a quote at the end from me. (To save you the suspense, here’s the quote: “It’s a tiny powerhouse packed with protein, vitamins and minerals, and it’s an important grain alternative, especially on Passover,” Becker said. “It’s great to have it on Passover instead of the usual potatoes, potatoes, potatoes. Most of the Passover foods just end up tasting like Passover, so we rely on quinoa to be that side staple.”)

— New this year is a seasoned version of Jeff Nathan Creations Gluten-Free Panko Flakes. I used the plain panko flakes last year as a gluten-free crumb coating for chicken and fish and liked their texture. But they didn’t have much taste, so I’m happy to see a seasoned version.

— I hate it when I open a bag of tapioca starch and get coated in a puff of white powder. So I like the fact that Gefen Tapioca Starch comes in an easily reclosable canister. I also like the reclosable canisters of potato starch from a few Passover brands.

— Dr Praeger’s offers some nice gluten-free options year-round and even more during Passover. I bought “Potato Crusted Fishies,” though now my kids have informed me that they will not eat fish sticks. Go figure.

— You can now buy so many gluten-free cookies, crackers and cakes throughout the year, it doesn’t make sense to buy the Passover versions, which are generally less nutritious and less tasty. Sometimes I’m tempted to buy the boxed bakery-style cookies, though most tend to be expensive and sugary. Still, it is sometimes nice to keep a box or two in the freezer. Shabtai Gourmet, a kosher bakery, is dedicated to baking gluten-free Passover goodies year-round. Oberlander’s , Schick’s and Hagadda also have a selection of gluten-free, bakery-style Passover cakes and cookies. I skip the Passover cake mixes; they’re generally not great. There are some frozen cake loaves that can be worthwhile, such as Osem marble cake and pound cake, which are small and easy to keep in the freezer.

— Generally, I skip the Passover noodles, pizza, pancakes and waffles. They usually end up mushy and gummy. Although this year I did buy frozen Heaven and Health gluten-free potato gnocchi.

— I’m always tempted by snack foods. I love all the boxes of chocolate available at Passover, though check the ingredients — not all are gluten-free. For snacks this year, I bought Guiltless Gourmet Crunchies nut squares and Paskesz Soft Crunch granola-style bars.

Passover, an eight-day holiday that celebrates when the Jews were freed from slavery in Egypt, seems to be a great gluten-free holiday. On Passover, we cannot eat any leavened bread — basically, no wheat, rye, barley, spelt or oats. Sounds great so far, right? But here’s the rub: On Passover, we eat matzo, which is made from wheat. Many Passover foods are made with matzo meal, so you need to read labels carefully to avoid matzo meal. Still, Passover is a great opportunity to stock up on some gluten-free foods that are hard to find year-round.

Gluten-free Passover foods are either marked as “gluten free” or as “non-gebrokts” (which means it does not contain matzo meal and is therefore gluten-free). While there are many gluten-free Passover products, many of them are expensive, don’t taste great and don’t have much nutritional value. That’s due to Passover prohibitions against other foods such as rice, corn and soy, which means that most Passover products rely on potato starch and lack in taste and nutrition.

I used to buy bags of gluten-free products during Passover, but I don’t do that as much anymore. (Well, that’s what I say, but my grocery bills and pantry indicate otherwise.) I skip most of the Passover cookies and cake mixes, as well as the Passover noodles, waffles and pizza made with potato flour; they’re simply not worth the poor taste and the expense.

If you can find a grocery store with a large kosher section, or a dedicated kosher grocery store, look for these gluten-free, kosher for Passover products that have made it into my grocery cart. (These represent my personal opinion. I am not compensated for reviews, nor did I accept free samples.)

END_OF_DOCUMENT_TOKEN_TO_BE_REPLACED

On Passover, we recall how the Israelites were slaves in ancient Egypt. To remember the unleavened bread they ate when they left Egypt, we don’t eat certain grains during the eight days of Passover. That means wheat, rye, barley and oats are prohibited (other than the grain used to make matzah).

As a result, many kosher for Passover foods are also gluten-free. Check to make sure the labels say “kosher for Passover” and that the ingredients do not contain any form of matzah (which can be labeled as matzah, matzah meal, cake meal or farfel — all of which contain wheat). Many Passover foods are now marked “gluten free.” Some are marked with the Yiddish word “non-gebrokts,” which means that the food does not contain matzah and is therefore gluten-free.

While Passover is a good time to stock up on some sweets and traditional Jewish foods, don’t go overboard. Because many grains are prohibited on Passover, prepared foods are often lacking in nutrition and taste. Skip the Passover cake mixes, cereals and pasta, as they are usually disappointing. In my family, the worst insult is to say that something “tastes like Passover,” meaning it is as dry as the Sinai desert.

I find it’s useful to have a gluten-free Passover shopping list, so I thought I would share mine. Please note that I am not compensated for these recommendations in any way. Also, this is not an exhaustive survey of all gluten-free Passover products. And even though I recommend specific products, always read labels to make sure foods are gluten-free.