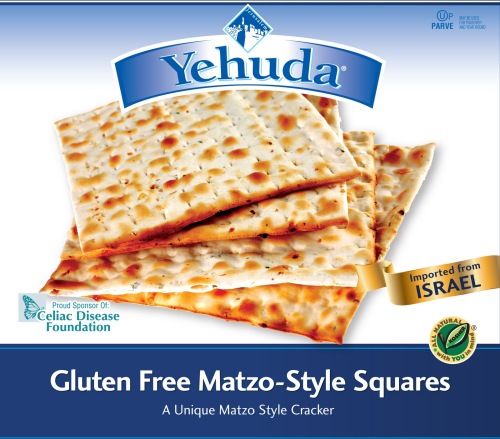 Saying something “tastes better than matzo” is not normally the strongest compliment. After all, matzo is somewhat dry and tasteless. But when a gluten-free product tastes better than the real deal, it’s cause for celebration.

New this year, Yehuda Gluten-Free Matzo-Style Squares have a lighter, more tender taste that traditional matzo. With a hint of salt, they taste similar to a thin, flaky flatbread or cracker. We opened a box so we could taste the product, and since then my kids have been begging for more. Seriously. And it’s not even Passover yet.

During the eight-day holiday of Passover, we do not eat grains that can ferment and become leavened. Interestingly, those grains are wheat, rye, barley, oats and spelt — the same glulten-containing grains that people with celiac disease must not eat. However, in another twist, matzo must be made from one of those five grains, though the flour must come into contact with water for less than 18 minutes so it doesn’t rise.

For the past few years, we’ve bought gluten-free oat matzo. It was expensive ($25 to $35 a box) and tasted only slightly better than the actual box.

The new Gluten-Free Matzo-Style Squares aren’t halachically (according to Jewish law) a replacement for matzo at the seder, since they are made from potato starch and tapioca starch, instead of wheat or oats. That’s why they are called “matzo style” instead of just “matzo.” But they taste better than gluten-free oat matzo and, at $5 to $7 a box, they are priced better too.

If you would like to buy gluten-free oat matzo that meets seder requirements, try Lakewood Matzoh or Gluten-Free Oat Matzos. Last year, Gluten-Free Oat Matzos had problems with cross-contamination at the factory, resulting in 80 ppm of gluten. This year, they say they’ve tested the oat matzo repeatedly and it was less than 5ppm. (A gluten-free product should be under 20ppm, under proposed FDA guidelines.)

I can’t find a link to buy the Gluten-Free Matzo-Style Squares online, but I bought them at a Chicago-area Jewel-Osco that carries kosher food. Happy Passover!

8 responses to “GF Matzo: Better Than the Real Deal”